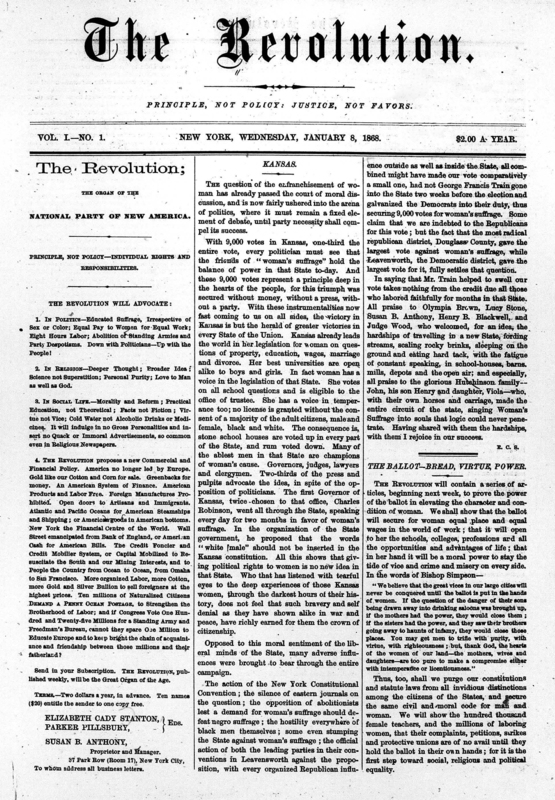 First page of the first issue of the The Revolution. To browse all issues of The Revolution, go to: http://library.lclark.edu/digcoll/items/browse?collection=21

With Susan B. Anthony as enthusiastic proprietor and business manager, Elizabeth Cady Stanton and Parker Pillsbury as dedicated editors, and the controversial George Francis Train as initial financier, The Revolution began publication on January 8, 1868. In the first issue of the New York paper, the editors explained: “[E]nfranchisement of woman is one of the leading ideas that calls this journal into existence…. [W]e think The Revolution a fitting name for a paper that will advocate so radical a reform as this involves in our political, religious and social world.” The first masthead read: “Principle, not policy; Justice, not favors,” which was later amended to include: “The True Republic—Men, their rights and nothing more; Women, their rights and nothing less.” The paper opposed the Fourteenth and Fifteenth amendments, and called for an “educated suffrage irrespective of sex and color,” along with practical education for girls, more occupations opened to women, equal pay to women and men for equal work, and even more liberal divorce laws. Upon Anthony and Stanton’s founding of the National Woman Suffrage Association in 1869, The Revolution became a strong voice for the organized woman suffrage movement.

Within two years, however, the future of The Revolution was a serious concern for Anthony. Financial support from George Francis Train had ended in the spring of 1869, and Lucy Stone had begun publication of a rival paper, The Woman’s Journal, in January of 1870. Anthony had purchased expensive, high-quality equipment, paid the staff a good wage, and refused to accept lucrative advertising for what she considered immoral alcohol and morphine-laden patent medicines. On May 26, 1870, Anthony and Stanton produced their last issue of The Revolution and announced a plan to create a joint stock company to finance the paper. The debt-ridden newspaper was ultimately sold to Laura J. Curtis Bullard, and Anthony assumed The Revolution’s $10,000 debt, which she satisfied in 1876, after six years of steady lecturing across the country. Anthony’s lecture tour of Oregon, Washington Territory and British Columbia, in the fall of 1871, was part of her effort to pay that debt.

Reorganized under Bullard, The Revolution became a literary and society periodical. The paper continued until February of 1872, when it ceased publication and was absorbed by the New York Christian Enquirer.