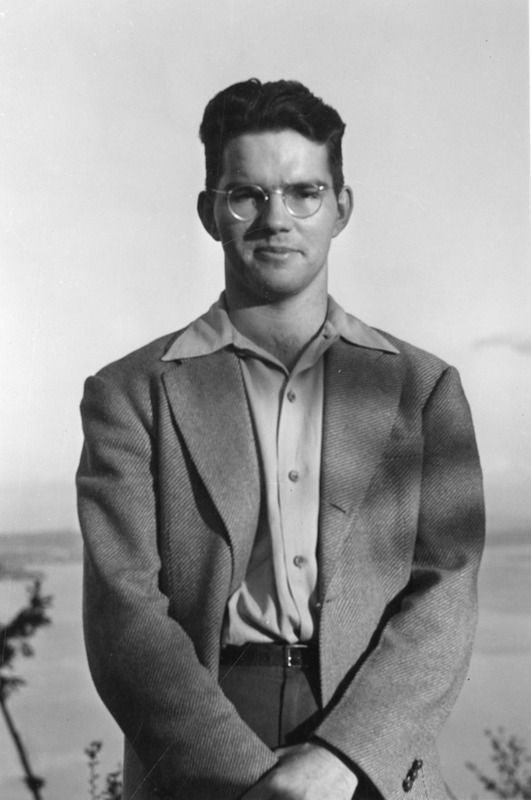 Henry Blocher, a conscientious objector and photographer in the CPS camps. A guide to Blocher's photograph's is described below.

The archival collections relating to CPS held by Lewis & Clark College are described below with links to the complete collection finding aids. Most of the collections relate to CPS camps in Oregon, and include correspondence, photographs, artwork, and manuscripts.

Summary: This collection includes a series of twenty-two letters from James Townsend, a WWII conscientious objector interned at the Cascade Locks (Oregon) Civilian Public Service Camp, to Don Baker, a C.O. who had been sentenced to prison at McNeil Island, Washington. The letters written from 1944 to 1945 cover a range of topics including activities at the Cascade Locks camp and philosophical discussions of pacifism.

Summary: This collection includes publications and other materials created by Glen Coffield, a poet, teacher, publisher, and pacifist, who lived in Oregon.

Summary: Harvey was a pacifist and an actress who lived at Civilian Public Service Camp 56, at Waldport, Oregon during World War II. This collection includes original recordings and a transcript of an oral history interview about Harvey's life and experiences in CPS, as well supporting materials including photographs and an MA thesis written by the interviewer.

Summary: Kemper Nomland was an architect and conscientious objector during World War II. This collection includes paintings by Nomland, as well as books related to the World War II Civilian Public Service camps.

Summary: Kermit Sheets was an artist, actor, and playwright who served as a conscientious objector during World War II and worked in San Francisco after the war. The collection includes: poetry, short stories, novels, and play drafts; correspondence; photographs; and other forms of documentation of the Civilian Public Service Fine Arts program and the post-war arts and theater in San Francisco.

Summary: William Stafford (1914-1993) was one of the most prolific and important American poets of the last half of the twentieth century. This collection includes all of Stafford's personal materials relating to his writing and teaching career.