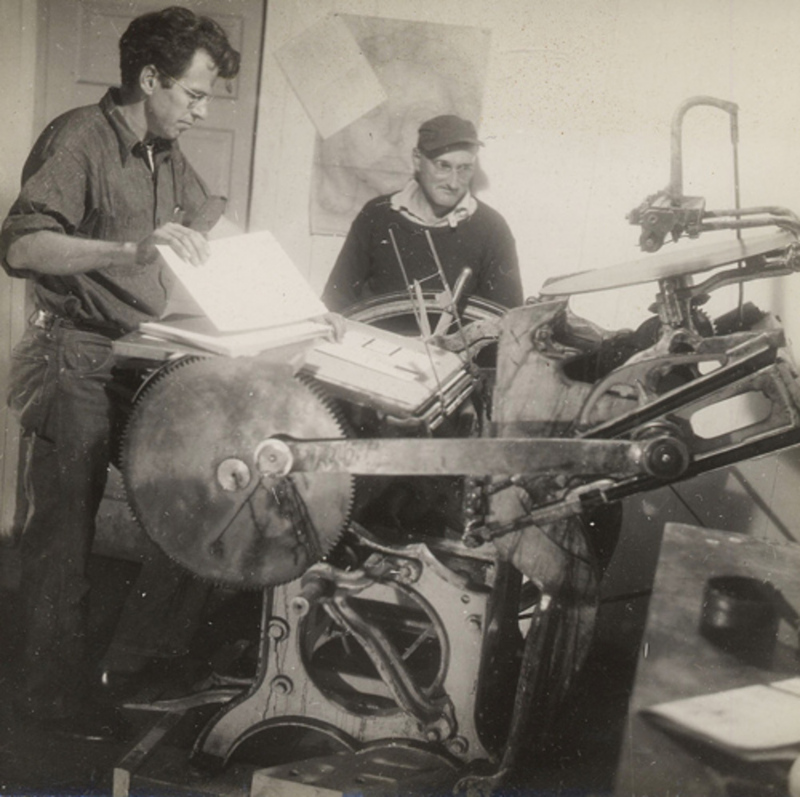 The Untide Press (1943-1951) was a small poetry press founded at Camp Angel, a Civilian Public Service (CPS) site near Waldport. In 1943, a small group of COs gathered at Camp Angel to implement a multi-faceted fine arts program that included a printing operation. The first publication issued by the program was Glen Coffield's The Untide ("What is not Tide is Untide"), an underground newsletter published in opposition to the official camp newsletter, The Tide. This was followed by X War Elegies, a collection of poemsby Fine Arts Program Director William Everson, issued serially with The Untide. When bound together, this collection became the press's first official publication.

The next three Untide books were small pamphlets assembled with a mimeograph, a silk screen, and a small letterpress. All three publications were praised for their quality and found an eager audience throughout the CPS network. Encouraged by this success, the group purchased a machine pressthat they used to issue nine more titles.

Although its body of work was not large, the Untide Press developed a reputation for issuing high-quality writing paired with innovative design. Writers included William Everson, Glen Coffield, Jacob Sloan, George Woodcock, John Walker, and Kenneth Patchen. Illustrators and designers included Kemper Nomland, Charles Davis, Clayton James, B. Straker James, William Eshelman, Wilfred Lang, and Adrian Wilson. Many of the people associated with the press later were instrumental figures in what became known as the San Francisco Renaissance in the 1950s.

The Lewis & Clark College Special Collections has a complete collection of the publications of the Untide Press. The items are listed in the Watzek Library online catalog (http://library.lclark.edu/).

The Untide newsletters can be viewed in their entirety in the Watzek digital collections at: http://digitalcollections.lclark.edu/items/browse?collection=7.

The Special Collections staff wrote and published a bibliography of the Untide Press in 2003. It can be viewed online at: http://digitalcollections.lclark.edu/items/show/6118.