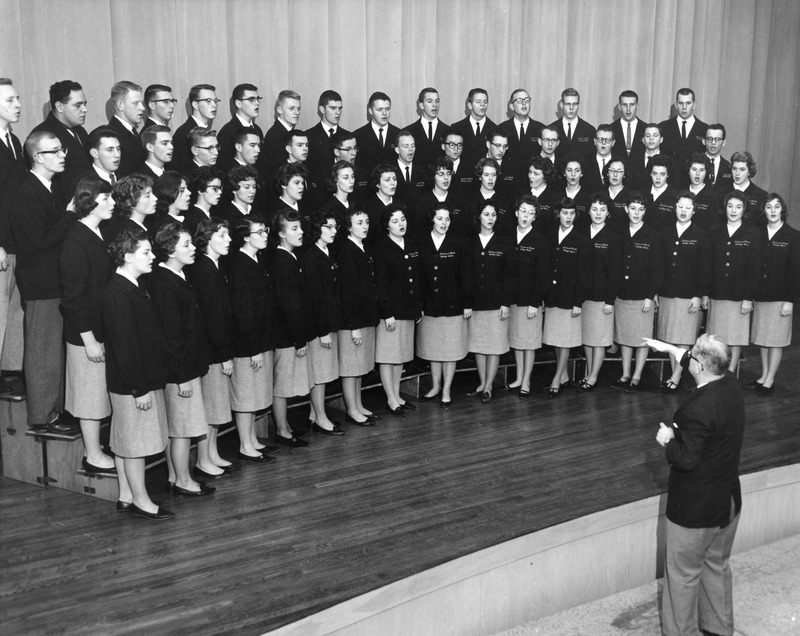 Glarum’s output, almost always structured in the a cappella tradition he learned from Christiansen, was highly religious, musically uplifting, and very accessible for its era.  His philosophy was centered on the idea that music should not be an activity reserved for the very talented, or as he put it, “EVERYONE SHOULD SING.” He kept on his desk an anonymous quote reading, “The forest would be very quiet if all the birds were silent except the best singers,” and that philosophy is reflected in the fact that his music was almost universally designed for performance by an amateur church choir or a student chorus. That is not to say that his style was not sophisticated; in fact, his harmonic and rhythmic complexity was quite innovative for the style that he was composing in, and he was an important figure in the revival of religious a cappella music in the mid-twentieth century. Rather, he believed that music should be above all singable, saying “altos can easily and beautifully sing the high A that tenors struggle for – why not let the altos sing it?”

In addition to his passion for religious music, Glarum also brought a variety of musical influences to the Lewis & Clark campus. His interests led him to bring conductors such as Norman Luboff, the composer of popular choral music, and Jester Hairston, the arranger of spirituals and other popular choral music, to work with students on campus. He also brought the art music composers Alan Hovhaness and Darius Milhaud to campus, and put together concerts celebrating their works, and in Hovhaness’s case, featuring the composer himself as conductor. Glarum was also interested in world music, collaborating in a choral performance with the traditional Japanese koto player Kimio Eto, and often programing works from a variety of cultures and traditions.